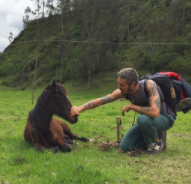 My name is Dan Connelly. Up to this point, I've spent my life split between New York and Chicago. I taught for five years on the Southwest side of Chicago in a Chicago public school called Curie Metro High School. I lived on the West Side of Chicago in a neighborhood called Humboldt Park. I have lived in San Francisco for over a decade. I am a Californian now. I am a Sagittarius. I enjoy pictures of kittens. I enjoy pictures of kittens hanging on to tree branches that say "hang in there." I enjoy animals wearing human clothes. My nickname in college was "Cookie." I like to sing, but I don't like to sing other people's songs. I have never been a strong swimmer, but I like to pretend in shallow water. I used to give firm handshakes. I still say "soda" instead of “pop” like other Chicagoans. I like jokes if they are funny. My grandmother's name is Jutta. That's not a joke. Don't laugh.